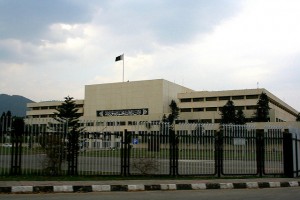 A Pakistani paramilitary soldier has been sentenced to death for killing an unarmed man in an incident caught on videotape and broadcast on TV.

Sarfaraz Shah, 22, was shot at point-blank range in Karachi in June.

The anti-terrorism court in Karachi found Shahid Zafar guilty of the killing and sentenced six other men to life imprisonment.

The killing sparked public anger and increased complaints of brutality by the security forces.

The judge ordered each of the other defendants – five paramilitaries and a civilian – to pay 100,000 rupees in compensation to Sarfaraz Shah’s family.

The Sindh branch of the Pakistan Rangers paramilitary force had argued that he was caught trying to rob someone, a charge his family denied.

The disturbing video shows a young man in a black T-shirt being dragged by his hair in a public park by a man in plain clothes.

Sarfaraz Shah’s brother consoles his mother at an earlier hearing in Karachi He is pushed towards a group of Sindh Rangers, who are in uniform and armed. The young man pleads for his life as one of the Rangers points a gun at his neck.

A little later, a Ranger shoots him twice at close range, hitting him in the thigh. The young man is seen writhing on the ground, bleeding heavily and begging for help.

The paramilitaries remain close to the injured man but do nothing to help him. Sarfaraz Shah died from his injuries.

The Rangers are a paramilitary force under the interior ministry.

There are about 10,000 Rangers in Karachi but rights groups say they are not sufficiently trained to deal with keeping civilian order.