Mumbai police have arrested journalist Jigna Vora in connection with murder of crime journalist J.Dey. According to the police she passed on information related to J.Dey to the organized crime syndicate. The information she allegedly sent reportedly played major role in the killing.
At this juncture it is curious to read what Ms.Vora, as a crime reporter attached to Asian Age, had reported about J.Dey’s murder. Here are a couple links.

Report – 1
J Dey murder: Conspiracy at bookie home
Aug 24, 2011 – Jigna Vora |
The conspiracy to murder senior journalist Jyotirmoy Dey was hatched at the lavish bungalow of bookie-turned-real estate developer Vinod Chembur, crime branch sources disclosed on Tuesday.
The meeting was reportedly held some time in March, just a few days before Dey travelled to London.
According to a senior crime branch official, Chembur spilled the beans on the details of the meeting.
“During our investigation and interrogations, we found out Chembur and a few others hatched the conspiracy to kill Dey, sometime in mid-March. It must have been just a few days before Dey went to London,” the official said.
“Chembur has spilled the beans and has given us the names of some people who were present.” 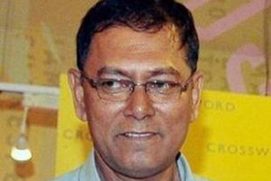 Report-2
Did UK Indian drug lord order Dey hit?
Jun 23, 2011 – Jigna Vora |
• Age Correspondent
Following weeks of exploring varied theories into the killing of veteran journalist Jyotirmoy Dey, the Mumbai police now suspects it may have been a hit ordered by an Indian drug baron based in the United Kingdom. The drug baron in question has long been on India’s list for extradition, but the Indian authorities have been unable to do so due to their failure to present a watertight case before the British authorities.
This follows claims by the Mumbai police that Dey’s personal emails had given them vital clues and a “focused” approach towards the murder case. The police is now taking a keen interest in Dey’s trips overseas and scrutinising all aspects carefully. Sources claimed that Dey, who had travelled to London last month, might have secretly met the drug lord in question and there are indications he was about to expose a major drug racket.
The officials said Dey’s emails suggested that he had met the drug baron for his story, who might have later ordered a hit on him. “While scrutinising his email account, we have come to know many details about Dey, who otherwise led a very secretive life,” a police official said.
“In May, Dey had travelled alone to London for 10 days,” said a senior crime branch official. What has flummoxed police officials are statements given by various people who were close to him. “Though Dey informed his office that he was travelling to London along with his wife, he actually went alone,” the crime branch official said.
“We are working on various angles and not ruling out anything. We are also investigating Dey’s various trips aboard,” said Himanshu Roy, joint commissioner of police (crime). Mr Roy had earlier said at a press briefing that Dey had booked his tickets through Raj Travels. “We have recorded the statement of employees of Raj Travels, who said Dey had not travelled with his wife but had only booked one ticket, for which he paid partly in cash and partly through a credit card,” said the official.
“We are attempting to establish if he was working on any investigative story against the drug baron due to which he did not disclose the real reason for his trip to the UK,” a crime branch official added.
The crime branch sleuths are mainly relying on information stored in nearly 3,000 emails and 250 drafts from his two personal email accounts. The police is also checking Dey’s personal email accounts as the journalist used these IDs to send and receive all his work mails, including all his stories. The police has also found some emails containing information that were not for his stories, but part of his correspondence with various sources.