Deve Gowda has completed 50 years in politics, considering his first election to Karnataka Assembly in 1962 as the beginning of his political career. Undoubtedly he stands first among the popular leaders with huge population behind him. Of course, he

had downfalls in his career graph. But his success lies in his capacity to rise from status zero. His party’s strength was reduced to negligible numbers after the split in the Janata Dal in 1998. In the very next elections (2004) he rose to become the kingmaker.

Despite his long career in politics he enjoyed the prime position for a lesser period. He was the Chief Minister for eighteen months and the Prime Minister for little over 10 months. Though he was elected to the assembly in 1962, elevated to the position of the leader of Opposition in 1972 and led the Janata Party to assume power in 1983, he had to wait till 1994 to become the Chief Minister.

His journey was not a smooth sail. He had to fight with leaders of forward community within the party, cut short growth of other promising leaders from his own community and select a few who would hardly challenge his leadership as his followers. By and large he succeeded in his efforts. Now his children also enjoy fruits of his hard labour.

No doubt the fact that he belongs to a socially not-so-backward land holders’ community has been the major influencing factor for his overall growth in politics. Had he belonged to any other backward class his career would not have been what it is today. In other words, he would not have enjoyed as many positions as he could.

Despite his long stint in politics Deve Gowda has not been able to extend his support base beyond Vokkaliga belt. Neither backward classes nor minorities opt to identify themselves with the JD(S). The gravest strength and weakness of the JD(S) is that is has been deemed to be Vokkaliga’s party.

H.D Kumaraswamy’s misdemeanor in 2006 proved costly for the party. He joined hands with the BJP and became the CM. That move widened the gap between the JD(S) and the minorities. Similarly Siddaramaiah’s exit from the party prompted the a few backward classes, if not all, view the JD(S) suspiciously.

Besides, the JD(S) supreme leader Deve Gowda time and again favoured people from his own community for important positions. The BJP is also seeing his hand in appointment of Justice Chandrashekharaiah as Upalokayukta. The chemistry between the JD(S) and the BJP underwent a serious change after B.S Yeddyurappa was replaced by a Gowda. And, interestingly, that change in chemistry caused reactions in the BJP too.

Deve Gowda and his family members have their say in the recruitments done by Karnataka Public Service Commission. If someone makes a detail study of people recruited under the general category and the 3A through KPSC he/she can easily make out the influence of the Gowda clan.

Politicians across the political spectrum accept that Deve Gowda is clever and also a man of schemes. He chooses the right pawn to move on right occasions. Soon after Siddaramaiah left the party, he raised his voice for internal reservation with the backward class categories. Despite having son in the CM’s gaddi he could not reclassify the reservation.

The legal battle he has waged against Ashok Kheny’s BMIC project is a landmark episode of his career. He has not given up the struggle. It is sad that the successive governments played to the tunes of the private project promoter at the cost of poor people’s hard earned land. It is equally sad that Deve Gowda’s struggle for justice in this case has not gone down well with the people other than those directly impacted by design of the project. It is also true that the JD(S) has failed to communicate the alleged injustice caused by the project to the public at large. 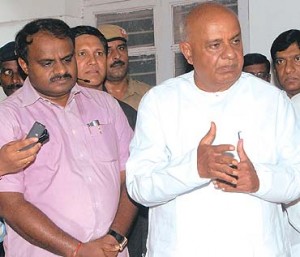 As he grew older, Deve Gowda lost the patience to communicate the issue in the language understood by the present generation. As a result sections of media and society view his struggle as Gowda’s fight against a Lingayat project promoter.

Besides, Deve Gowda has failed to build his party on a strong ideological base. He himself did not follow any ideology, except the ideology of convenience. His son emerged as his heir apparent after a coup against the Congress-JD(S) combine. He is also going on the same path as his father did. His burst of anger in reaction to Siddaramaiah’s question why could not he nominate any among – M.C Nanaiah, PGR Sindhia, Basavaraj Horatti – as next CM candidate from the JD(S), alone is enough to understand he would not be different from his father. The tradition of family rule continues.