Sagarika Ghosh of Cnn.Ibn anchored a discussion on the issue ‘Sh

ould Bhagvad Gita be India’s national book?’ on December 20 in her programme Face the Nation. Earlier on the day Indian parliament had responded to a petition in Siberian court demanding ban on Russian translation of Swamy Prabhupada’s book on Bhagvad Gita. The contentious issue in the book is that it carried message extremist in nature.

Noted thinker Prof. Kancha Ilaih, spokesperson of ISKCON Amogh Leela Das, president of Janata Party Dr. Subramanya Swamy and Prof Pushpesh Panth of JNU were on the panel. Jaggi Vasudev’s opinion on the issue was also aired on the programme. Prof. Ilaiah had joined the debate from Hyderabad.

Going by the names of the individuals on the panel one could easily make out that the anchor or the channel did not give enough space for the ‘other view’. It was an interesting debate since there was lot of scope to study how so called ‘upper class intellectuals’ belittle, ignore and ridicule the opinions expressed by a thinker known for his organic views, based on democratic principles.

As Prof. Ilaiah disputed the ‘common belief’ that Bhagvad Gita is a book of non-violence, Dr. Swamy reacted, “Kancha Ilaiah, as usual is doing either propaganda or not read the book. He should read it first”. Arrogance was writ large on his face.

Prof. Pushpesh and another guy from ISKCON went on praising with superlatives. Prof. Pushpesh said Gita is a great work, you get into it and you will get what you want. ISKCON spokesperson said Gita is a ‘science of soul’ and in that way it is concerned to all no matter the religion, he or she belongs to. 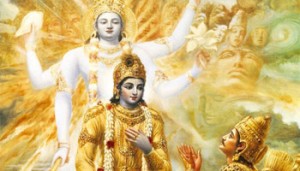 Nobody in the panel even attempted to dispute the fact that Gita taught ‘killing enemy through means of god’. When Prof. Kancha Ilaiah raised that, nobody bothered to respond to it properly.  Instead, they exhibited mannerisms, ridiculing in nature. Prof. Pushpesh stated that the whole body is a metaphor for Kurukshetra! If he wants to study the text with metaphors of such magnitude, it is fine. But the simple reading of the text tells readers different things. Lord Krishna in straight forward words provokes Arjuna to fight his relatives in the war field. And, as we know Arjuna follows it. To that extent the book preaches violence.

Kancha Ilaiah, citing Dr.B.R Ambedkar’s observations on the Gita, argued that it stood on the premises of four varnas. Of course there are enough evidences in the text to substantiate the argument. Further, the saying ‘don’t expect the fruits for your labour’ – is simply the ideology which spoiled the fortune of the working class, which was constituted by majority of backward classes and dalits.

Interestingly, the anchor also joins the panel in her studio to counter Kancha Ilaiah’s views. Kancha Ilaiah rejects the idea of declaring it a national book, arguing that the book has divisive elements and honouring it with such a status was against

diversity of the land.

Either by slip of her tongue or in a deliberate attempt Sagarika Ghosh asks Prof. Pushpesh to quote from Bhagvad Gita so that ‘WE’ can counter Kancha Ilaiah’s argument and state it is not a religious text (19.07 min). Her tone and use of words explicitly convey that she finds comfortable with the argument placed by ‘the upper caste intellectuals’. And, with that she raises doubt among the viewers, at least a section of viewers, that if her intention in organising such debate was only to echo the feelings raised by the BJP on the floor of parliament.