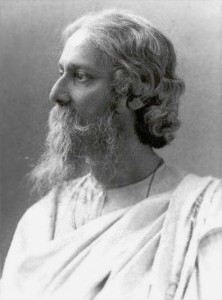 Rabindranath Tagore himself commenting on the controversy that the poem was written to praise and welcome King George V.

“A certain high official in His Majesty’s service, who was also my friend, had requested that I write a song of felicitation towards the Emperor. The request simply amazed me. It caused a great stir in my heart. In response to that great mental turmoil, I pronounced the victory in Jana Gana Mana of that Bhagya Vidhata [ed. God of Destiny] of India who has from age after age held steadfast the reins of India’s chariot through rise and fall, through the straight path and the curved. That Lord of Destiny, that Reader of the Collective Mind of India, that Perennial Guide, could never be George V, George VI, or any other George. Even my official friend understood this about the song. After all, even if his admiration for the crown was excessive, he was not lacking in simple common sense.”

“I should only insult myself if I cared to answer those who consider me capable of such unbounded stupidity as to sing in praise of George the Fourth or George the Fifth as the Eternal Charioteer leading the pilgrims on their journey through countless ages of the timeless history of mankind.

More information and the complete song is available here.