Dalits are worried over the way the so called movement against corruption, led by Anna Hazare is going on. Members of Dalit Sangharsha Samiti and Samata Sainik Dal staged a dharna, different from what we have been shown in TV media, in Hassan on Tuesday. 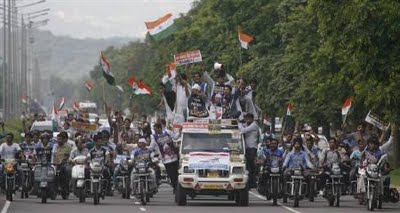 They raised voice against the Anna movement and the proposed draft of the Jan Lokpal Bill. They have serious disagreements with the Team Anna for its disrespect for parliamentary process in particular and constitution in general.

The downtrodden sections of society are worried because they see people who have been against the reservation in big numbers behind Anna. They have serious doubts about Anna himself. He, despite being a Gandhian and social reformer, has not succeeded to bring in harmony between Dalits and upper castes in his own village. The Dalits have never heard Anna criticizing the massacre of Dalits at Khirlanji in his home state. They never heard him supporting reservation in the private sector. Instead, on occasions Anna had praised Bal Thackrey and Narendra Modi – undoubtedly among inhuman creatures on the earth.

Besides, as noted thinker Kancha Ilaiah pointed out in a TV debate, the draft prepared by the civic society nowhere speaks about representation to a dalit, backward classes, minorities and women. They use the words – legal luminary, eminent personalities – to mean Noble awardees, Magsaysay recipients.

The mode of struggle opted by Anna and his team is reminds Dalits the historic fast by Mahatma Gandhi in opposition to separate electorate for them. A large section of Dalits even today argued had Gandhi not opposed the separate electorate the state of Dalits would have been better by this time. Naturally, for them Anna Hazare’s fast is no different from ‘blackmail’ tactics. One of the demands put forward by protesters in Hassan is that government not heed to the ‘blackmail’ tactics of Anna Hazare.

Prof Kancha Ilaiah rightly opined that if the government heeds to the Anna’s demand it would set a bad precedence and might lead to far more critical situations in future. Naxals might come up with a draft bill and demand the government pass it as it is in parliament. They might even ‘blackmail’ the government at gun point.

The team Anna does not have a face who can remotely represent the depressed sections of society. Kiran Bedi has been on TV screen endorsing a washing powder (Ariel) occasionally. She endorses the product as the best in the market and converts the old cloth new. Any person who has used the product can easily blame that Kiran Bedi is wrong. Is it not corruption to endorse a product with blatant lies? Does a retired IPS officer, a Magsaysay awardee need to endorse a product for her survival? When she herself endorses a product for her greed for money, what moral rights she has to fight against corruption. There are hundreds of similar people who have been involved in the campaign across the country.

The larger threat the Dalits see in the whole drama is that the event might end up bringing in the BJP-led NDA in the rule at the Centre. They look at the protests as part of the BJP-RSS’ strategy to bring down the Cong-led UPA and replace it by the BJP.

1 thought on “Anna Movement – Dalits Have Reasons to Worry”